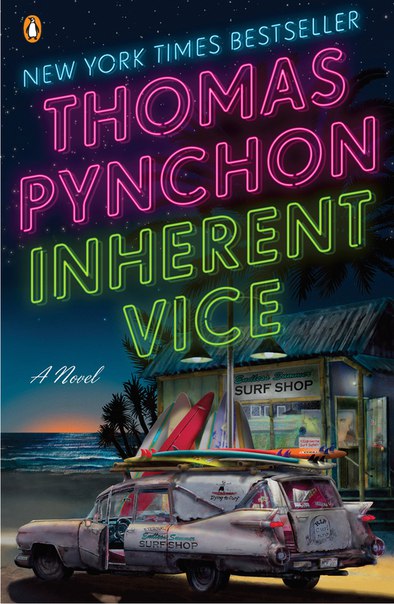 If, in Pynchonese, traveling East is to go "against the day", into the past, memory, regret, impossibility, and if traveling West is to go "with the day", into the future, the unknown, maturation, the coming of the next generation, toward acceptance of age and death, then where, in the geography of the imagination, is Doc Sportello's Los Angeles As far West as the continent can run until it comes up against the great vastness of the Pacific, and one has to stop, struck dumb and humbled by the leagues and depths of total inhumanity and noisy mystery out there, or one must learn to glide on the surface of the depths, like a surfer, or vault toward the sun and over it all in flight like an airplane or a bird, or one swims deep, and faces death by water, or one simply takes up residence on the beach and digs the radiant spray and the mysteries and ghosts of the Eternal Present.

I loved every page of this book, Pynchon riffing on The Big Lebowski by way of Dashiell Hammett and Raymond Chandler, Lebowski already by way of them anyway, and the Coens' entire oeuvre owing something to Pynchon, so then we can contemplate the influenced influencing the original influence, and that network of relations becomes pleasantly complex. So why not ignore all of that entirely and let's say what we have here is a genre piece, and so there are requirements, noir requirements, and that Pynchon handles all of these deftly. I see Inherent Vice as of a piece with Mason & Dixon and Against The Day, not in ambition or scale, but in a kind of compression of motifs worked out at large in those two Big Novels- the tyranny of Time, Light and Absence, invisible worlds or dimensions beyond the horizon of our perception interacting with our reality, sometimes manifest in dreams, determination and free will, the layers and mechanisms and hidden motives of Power, the machinations of authority, manipulation, paranoia, illusion, where the essence of the human being resides in all of this, the importance of others to help see us through. American weirdness. The Sixties obeyed their own weird death drive, and Inherent Vice is about the death of that dream, or when that dream turned into a nightmare, blood spraying in psychedelic fountains all over the walls, and those became words too, like Pig, because Charles Manson is a presiding ghost here, and Vietnam too, amid congeries of ghosts. The dead walk and everyone has their double and triple motives, and there is Surf Rock in fucking spades, but this is Pynchon, so it's all hilarious and bizarre and deeply, intelligently crafted in liquid electric prose.

There's strata of preposterous nomenclature. Lots and lots of weed is smoked. Tacos are eaten. There are dangerously attractive women in short skirts and a litany of cars almost as sexy and dangerous. Nefarious plots that unfold like a magnolia and never close. Gilligan's Island & Godzilla. The whole thing feels like trying to plot the coordinates of someone's dream, to quote someone else. It's pure fun, and at its heart is the fall of America from its promised Eden, so it's sadly beautiful and moving at times, but briefly, because this shape shifting surreality is a Doper's Memory and possible hallucination, a tragicomedy, the short-term falling off into fogs of the past, and the future, or What's Ahead, sunblind, or materializing in presences and essences obscured by mist. It's set to music and language that fixes itself to certain days past, but the Doc is timeless. A bad man trying to do good in the fallen world.

Part noir, part psychedelic romp, all Thomas Pynchon- private eye Doc Sportello comes, occasionally, out of a marijuana haze to watch the end of an era as free love slips away and paranoia creeps in with the L.A. fog

It’s been awhile since Doc Sportello has seen his ex-girlfriend. Suddenly out of nowhere she shows up with a story about a plot to kidnap a billionaire land developer whom she just happens to be in love with. Easy for her to say. It’s the tail end of the psychedelic sixties in L.A., and Doc knows that “love” is another of those words going around at the moment, like “trip” or “groovy,” except that this one usually leads to trouble. Despite which he soon finds himself drawn into a bizarre tangle of motives and passions whose cast of characters includes surfers, hustlers, dopers and rockers, a murderous loan shark, a tenor sax player working undercover, an ex-con with a swastika tattoo and a fondness for Ethel Merman, and a mysterious entity known as the Golden Fang, which may only be a tax dodge set up by some dentists.

In this lively yarn, Thomas Pynchon, working in an unaccustomed genre, provides a classic illustration of the principle that if you can remember the sixties, you weren’t there . . . or . . . if you were there, then you . . . or, wait, is it . 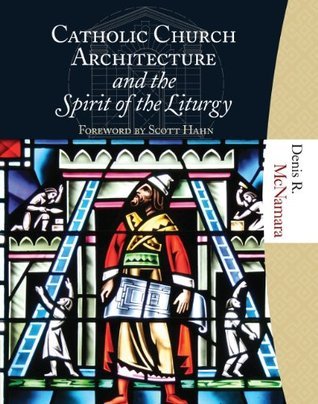 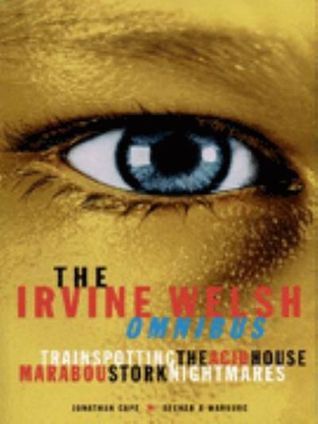 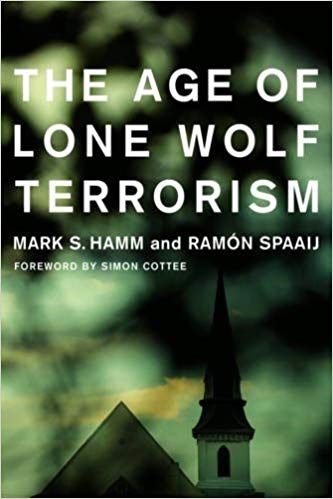 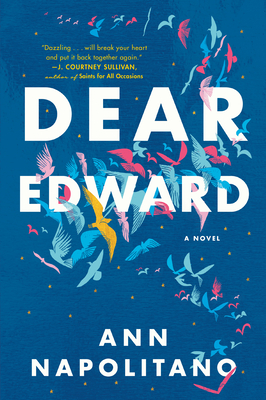